Northernmost lock- and ice-free port on the Mississippi River

105 million tons of cargo through the region annually 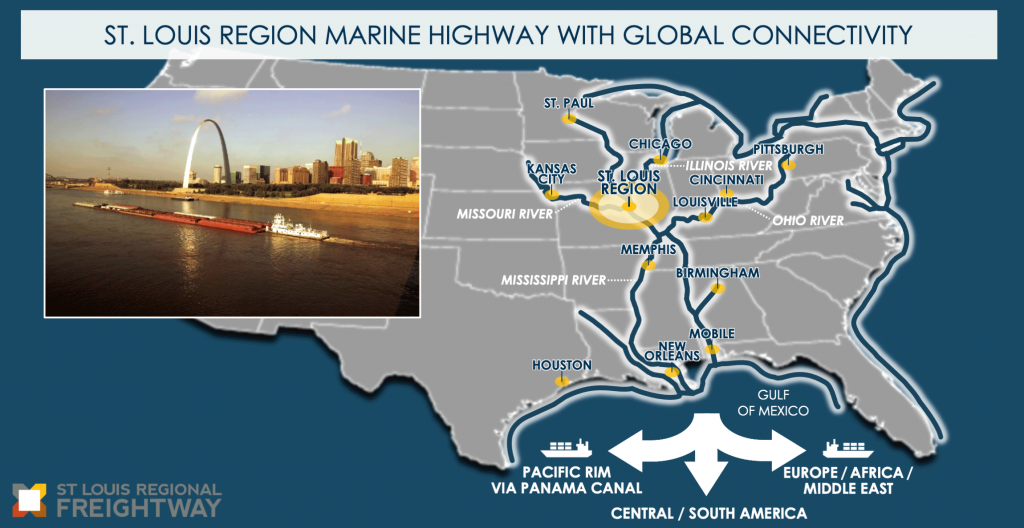 The St. Louis Regional Freightway’s port system includes both the Port of Metropolitan St. Louis and portions of the Port of Kaskaskia, IL. Our strategic location on the Mississippi River is the northernmost lock and ice-free port on the river and offers substantial fleeting operations. Efficiency has emerged as a hallmark of the region’s port system, which not only is the country’s third-largest inland port system, but also the most efficient. The St. Louis region’s port system is responsible for 70 of the 855 miles (8 percent) of the Mississippi River from Minneapolis, Minn., to the Ohio River near Cairo, Ill. These 70 miles carry almost one-third of the river’s total freight, a direct reflection of the system’s efficiencies. The barge industry routinely handles approximately 436,000 tons per mile, which is almost two-and-a-half times more efficient than its closest competitors. This activity takes place at the 200-plus private terminals operating within our region’s port system, each of which can be seen on our interactive map.

These strengths are even more evident along a 15-mile stretch of the Mississippi River which has gained recognition as the Ag Coast of America. It is home to 16 barge-transfer facilities that, at total capacity, can handle more than 150 barges a day – the highest level of capacity anywhere along the Mississippi River. Currently, 50% of U.S. crops and livestock are produced within a 500-mile radius of the St. Louis region, including approximately 80% of corn and soybean acreage. The St. Louis region’s strategic location on the river, infrastructure assets and multimodal connectivity enable it to play a crucial role in moving those commodities.

Ramping up for Container Market Growth

With the new wave of larger ocean carrier container vessels, projected global growth in the container market by 2030, and the emphasis to reduce truck traffic on the nation’s highway system, ports in the bi-state St. Louis area and other Midwest regions are working together to provide container-on-barge (COB) and a proposed container-on-vessel (COV) service. These efforts include ports investing in new equipment, repositioning of empty containers, channel deepening and other infrastructure investment. Since launching COB service at America’s Central Port in 2020, empty containers are now headed south every other week for repositioning in the gulf to get them back overseas to Asia where they were needed. The goal is to continue to grow the number of containers and start moving product via this COB service.

Innovative container-on-vessel (COV) service on the Mississippi River and adjacent inland rivers would pair with COB service as part of a hub and spoke system that would serve key consolidation ports of the St. Louis region, Memphis, Tenn., and several other feeder ports. The Port of Herculaneum in Jefferson County, Missouri, has been identified as a hub for a key terminal in the proposed service. The COV service is part of a plan calling for patented new waterway vessels that will swiftly move large volumes of goods and commodities along the inland waterways, effectively creating an all-water north-south trade lane connecting the Midwest to the lower Mississippi River and on to worldwide destinations. Based on milestones reached in 2020 and 2021, service on the new route could be available to shippers in 2024, and shippers using the new service could see cost savings ranging from 30 to 40 percent.