Efforts to Bring Container on Vessel Service to the St. Louis Region Picking Up Speed

Efforts to Bring Container on Vessel Service to the St. Louis Region Picking Up Speed

Plans to transport freight via innovative waterway vessels will revolutionize the inland waterway system and provide significant transportation cost savings for shippers, especially those accessing the Midwest by utilizing the Mississippi River and its tributaries, according to Sal Litrico, CEO for American Patriot Container Transport, a wholly owned subsidiary of American Patriot Holdings LLC.

Litrico presented information about Container on Vessel (COV) innovations at two St. Louis Regional Freightway Industry Forums in late August in St. Louis, Missouri, sponsored by America’s Central Port, the Jefferson County Port Authority, Plaquemines Port Harbor & Terminal District, and Riverview Commerce Park, LLC. Litrico said shippers could potentially save between 30 to 40 percent versus other intermodal alternatives by using patented vessels capable of carrying mass quantities of containerized freight on an all-water route connecting ports in the St. Louis region and other ports in the Midwest to the lower Mississippi River, and ultimately to Asia, Europe and other foreign ports. Litrico said those projected savings would come without compromising the necessary levels of frequency and reliability. Stakeholders from all modes of the freight industry and the agriculture industry learned more at the St. Louis Regional Freightway Industry Forums from Litrico and others about plans for COV shipments coming to the Midwest. 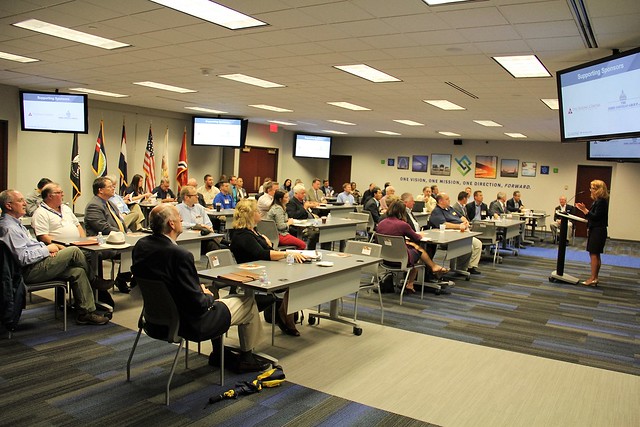 The expansion of the Panama Canal opened the door to an all-water route into the Midwest. The widened canal can accommodate larger vessels (from 5,000 twenty-foot equivalent units (TEU) to 18,000 TEU) whereas, previously, 60 percent of ocean going vessels could not fit through the canal. With the additional travel time to the Gulf Coast offset by congestion-related delays and longer dwell times at the West Coast ports, shippers now have a viable and efficient alternate route. That new all-water route for bigger vessels to access the heartland of America via the planned Plaquemines Port container terminal provides economies of scale which permits deeper market penetration into the United States from the Gulf Coast, eroding cost advantages previously associated with the East and West Coasts.

“Cargo flows to the lowest cost, most efficient route, so all we had to do was build the lowest cost, most efficient route,” said Sandy Sanders, Executive Director of the Plaquemines Port Harbor and Terminal District (PPHTD). PPHTD has Memorandums of Understanding in place with the St. Louis Regional Freightway and various ports in the St. Louis region and throughout the Midwest, as well as an agreement with innovative marine transportation leader American Patriot Holdings LLC (APH). “We’re going to revolutionize onward movement of cargo to the Midwest and from the Midwest to the world, utilizing the first interstate highway, the inland waterway system,” Sanders added.

Sanders and Litrico said the goal is to develop a hub-and-spoke transportation system for container transport vessel shipments from Plaquemines, at mile 50-55 on the Mississippi River south of New Orleans, to Midwest markets, which represent 40 percent of U.S. land area and 15 percent of the U.S. gross domestic product or GDP.

They view this COV approach as a way to move a critical mass of containerized product significantly faster than Container on Barge (COB), resulting in lower landed transportation costs. This insight indicates just how significant the cost savings could be for this new waterway transportation alternative that also would deliver many other benefits, including improved reliability, enhanced operational safety and reduced environmental impact.

The specialized APH vessels that would be used to provide the COV service have patented features enabling high cargo payload and unprecedented upriver speeds. APH’s Liner vessel will carry up to 2,500 containers at speeds of 13 miles per hour with virtually no wake, making round trips from Plaquemines to the St. Louis region possible in 10 days, significantly faster than other options. In contrast, COB transport, which moves at between 4 to 5 miles per hour on upriver trips, takes from 20 to 24 days of total transportation time. Despite the additional days of ocean carrier transit time from Asia to the U.S. Gulf Coast versus Los Angeles-Long Beach, the estimated net transportation time to St. Louis regional shippers is indistinguishable due to intermodal delays and West Coast dwell and delay times. Growth at the combined Los Angeles-Long Beach ports is anticipated to increase from 16 million TEU in 2017 to 40 million TEU in 2030 said another presenter, Mike Steenhoek, Executive Director of the Soy Transportation Coalition.

APH’s Hybrid vessels would be a little smaller and more nimble, so that in addition to making direct trips between the Port of Plaquemines and Midwest ports along the Mississippi, they would also connect with other ports on the tributary rivers above the locks and dams, picking up additional freight and supporting the hub and spoke system. APH anticipates today’s COB services would also support the system as a feeder vessel. Final engineering and designs are underway for the innovative APH vessels which recently completed model testing in Germany.

Sanders said the new multimodal gateway terminal being built at the Port of Plaquemines would be capable of servicing the largest ocean carriers (20,000+ TEU) and could accommodate eight unit trains right up to the dock, in contrast to other large ports where one unit train would have to be cut three times to get through the yard. The new terminal will feature modern terminal technology to expedite container throughput and be served by 15 150-gauge cranes. Sanders also talked about recently securing permission at an adjacent naval airport for cargo planes to land.

With the ability to handle so much cargo mass between the vessels, the gateway terminal, and additional terminals envisioned at Midwest ports, such as the Jefferson County Port just south of St. Louis, the all-water route from Asia, and other foreign ports, to the Midwest will significantly reduce shippers landed transportation costs versus rail and truck costs from other gateway ports. Litrico said a recent study indicates those savings would range from at least 30 percent for products being exported to 40 percent for imports, compared to shipping product to or from the Los Angeles-Long Beach ports to the Midwest via rail.

“Our mode of transportation is the principal driver of the savings,” Litrico added. “It’s about critical mass, speed, optimizing logistics, vertical integration and providing the lowest landed transportation costs.”

“What excites me about the APH model is that it allows these farmers to engage in the international marketplace without having to have huge economies of scale,” said Steenhoek. He added, “A supply chain is more viable if you can have a robust inbound movement and a robust outbound movement. It’s encouraging that there’s so much interest from non-ag industries in this alternative.”

“Located at the multimodal crossroads of America, the St. Louis region is recognized as a leader in transportation,” Dennis Wilmsmeyer said. Wilmsmeyer is the executive director of America’s Central Port. “But those of us trying to get a piece of the projected growth in freight volumes need to get creative. Freight needs to find the lowest cost alternative, and the containerization of various products, ranging from tires and scrap metal to agriculture products, such as specialized soy beans, is part of the solution.”

“The key to success,” said Mary Lamie, Executive Director of the St. Louis Regional Freightway, “is going to be the integration of all modes of transportation and building the partnerships to jointly create the volume needed to support this new option to transport freight. It’s an innovative alternative that offers reliability, efficiency, cargo flexibility, sustainability, and a competitive price advantage. We are starting to engage with shippers and carriers to let them know about this new option.”

Ultimately, the world-class multimodal network in the St. Louis region helped it fit into the developing plans but given the need to create the volume required to make the service viable, partnerships with other ports in other Midwest regions is essential for success. Those partnerships are being forged and representatives from ports in Memphis, Kansas City, which are also in discussions with American Patriot Holdings, attended the recent St. Louis Regional Freightway Industry Forums along with representatives from ports in the St. Louis region. Similar events to update cargo owners, shippers, carriers and leaders in the freight and agricultural industries are planned, a clear indication that competitors recognize that the power of collaboration may be the key to success for this particular initiative as they work together create the volume needed to support the service.

“This type of program can really give us a visible implementation of the system which will make the Mississippi River and its tributaries a power house. It will literally be another Gulf Coast,” said Randy Richardson, Executive Director of the Memphis and Shelby County Port Commission. “Then we have a physical, tangible point to say this is a system and it needs to be funded as a system, and we need to look at it that way in congress and then we will have infinitely more power.” Richardson attended the St. Louis Regional Freightway Industry Forum and shared his comments during the question and answer portion of the program.

Sanders and Litrico’s next step to advance the COV effort is continuing to line up cargo for the return trips, the trips back down the Mississippi River to the Gulf of Mexico. To that end, the STC/ISA (Soy Transportation Coalition/Illinois Soy Association) which represents 13 states and 85 percent of the soy production in the U.S. just completed a third party study. The study, conducted by Informa economics, evaluated grain exports from the Midwest utilizing the APH/PPHTD all-water route to Asia versus intermodal to the West Coast. The study concluded the all-water routing demonstrated significant savings. The full report and its findings will available on STC’s web within the next few weeks.
Infrastructure investment

Manufacturer to add jobs as it doubles operations in Washington