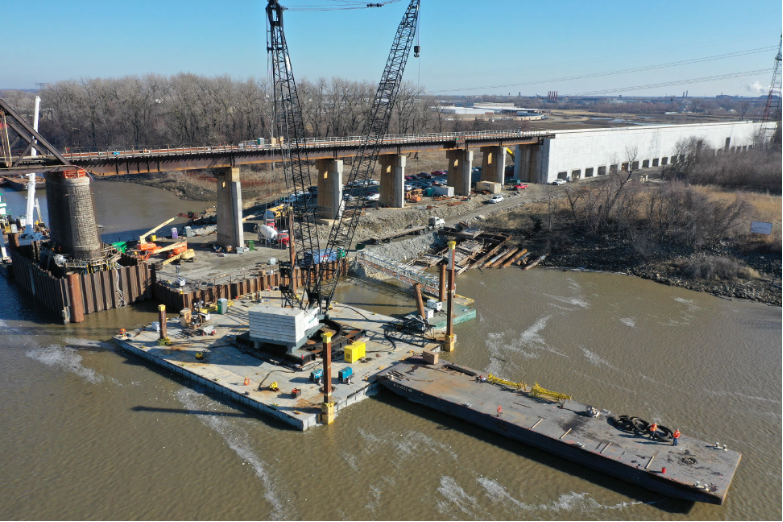 Continuing work on MoDOT’s I-270 North Project will require a mid-April closure of Interstate 270 in North St. Louis County. It is anticipated this closure location will be the region’s largest traffic impact in calendar year 2021 as work advances to improve this critical logistics corridor in our region.

Location: I-270 Eastbound and Westbound will be closed near West Florissant

Weekend Detour: Traffic will be detoured utilizing the ramps around the bridge demolition activities. A basic map of the detour for interstate travel is provided below.

Major delays are expected on Saturday (April 17) and Sunday (April 18) between 9 a.m. and 9 p.m. Drivers are encouraged to use alternate routes throughout the weekend.

A recent news release issued by the St. Louis Regional Freightway has generated widespread coverage, calling attention to how more public transit options and public-private sector collaboration are creating better access to the labor pool for industrial park employers in the region. These efforts come on the heels of record-setting growth in the St. Louis region’s industrial sector in recent years, which has resulted in strong demand for labor and the need for enhanced transportation options to connect a larger pool of employees to the thousands of jobs that have been added. Collaboration between the tenants in some of the largest industrial parks, the St. Louis Regional Freightway, Metro Transit, Madison County Transit, and municipalities such as Madison County, Ill., and Hazelwood, Mo., has resulted in those needs being met. The commitment to provide service where needed most resulted in increased ridership even in the midst of the pandemic. You can access the release below to learn more.