Securing two billion dollars to fund major transportation infrastructure improvements has been identified as critical so that manufacturing and logistics sectors in the St. Louis region can compete in the global market. That was the key message delivered at a Fall Industry Forum hosted by the St. Louis Regional Freightway in St. Louis last month, which featured a panel of engineers from the Missouri and Illinois Departments of Transportation and a representative from The Boeing Company.

“The St. Louis Regional Freightway’s multimodal list of projects represent the infrastructure investment that is needed to deliver an efficient and reliable freight network that provides easy access to all modes of transportation,” said Mary Lamie, Executive Director of the St. Louis Regional Freightway. “These are the projects that will support our region’s supply chain network and allow this industry sector to compete globally. These businesses account for $75 billion in manufacturing output, which represents 26 percent of the total regional output, underscoring the significant impact of manufacturing in the St. Louis region.”

Lamie called attention to a several key projects on the priority list of 20 multimodal projects identified as critical to modernize the St. Louis region’s freight infrastructure. 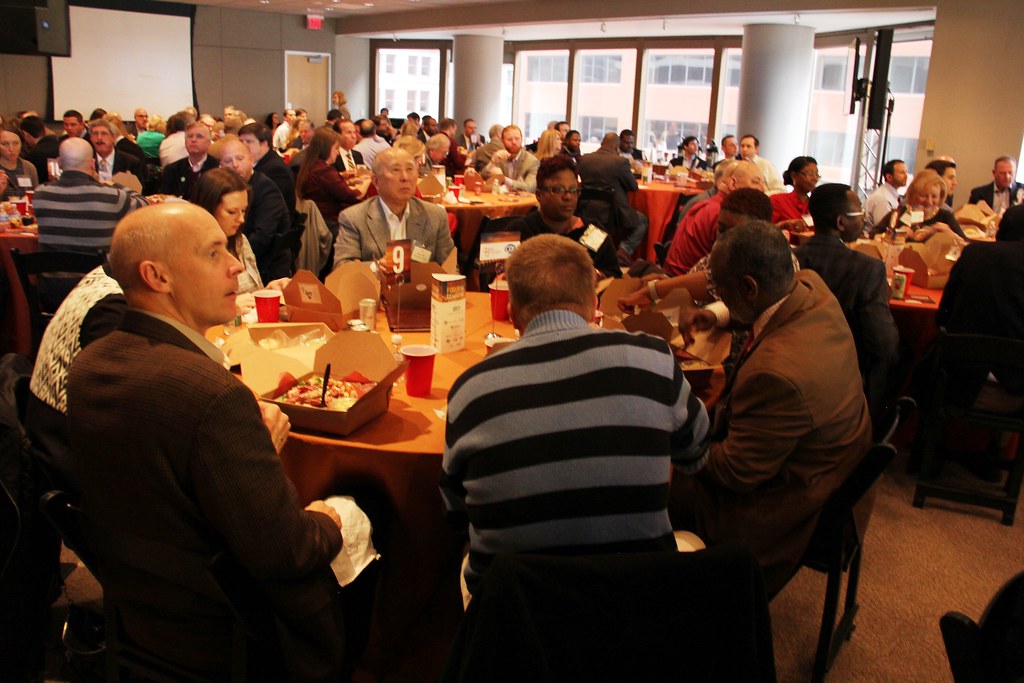 The infrastructure project rated as the highest priority by both the public sector and the private freight industry, including the barge industry, is the replacement of the Merchants Bridge which is owned by the Terminal Railroad Association of St. Louis (TRRA). Built in 1890, the Merchants Bridge is the oldest of the 23 railroad bridges spanning the Mississippi River between New Orleans and Minnesota, and it is the sixth most heavily used. A mix of private and federal funds is in place to cover two-thirds of the replacement cost, which is estimated at $214 million, and MoDOT, TRRA and Bi-State Development have submitted a joint grant application to the federal government seeking the rest of the funds through the Infrastructure for Rebuilding America program.

TRRA President Mike McCarthy said, “As far as shovel ready projects go, this is it. It’s exciting to be at a point where we’re so close to making this a reality.”

The private industry sector, as well as elected officials, gained a better understanding at the Industry Forum of the impact that would result in anticipated supply chain disruptions if the construction work is spread out over 20 years. For example, if the proposed Interstate 270 improvements project, which would stretch several miles from Lindbergh Boulevard in Missouri to Route 111 in Illinois, is constructed over a 20-year time frame incorporating between 10 to 12 individual contracts, there would be a supply chain disruption that would have a significant impact on the St. Louis region’s network of suppliers as well as the industries’ competitiveness.

“The Freightway is focused on making sure the right infrastructure is in place to meet their current needs and plan for future demand,” Lamie said.

The eight-county St. Louis metropolitan area’s current freight-related landscape is home to more than 14,000 employers in the sectors of manufacturing, wholesale trade, transportation and warehousing. Collectively, they have more than 183,500 employees residing across the region. This dense cluster of businesses represent the region’s supply chain network of suppliers of manufactured products, transportation and warehouse services. These businesses also have an interdependency with each other with moving, handling and assembling of materials, parts and products within the bi-state region.“

One of those employers is The Boeing Company. As Missouri’s largest manufacturer, Boeing has a major impact on the local economy, employing 14,000 individuals in the St. Louis area alone. Boeing’s economic impact is even more significant when you factor in its suppliers. Panelist Randell Gelzer Jr. said the company paid $1.7 billion to 1,072 suppliers in Missouri and Illinois. Gelzer is senior director for State and Local in the Central Region for Boeing. He said, since 2006, Boeing has invested more than $524 million in site upgrades and infrastructure at its three regional facilities in St. Louis and St. Charles counties in Missouri and in St. Clair County in Illinois. Operations at those facilities include military aircraft and weapons systems production, 777X commercial aircraft production, the headquarters for Strike, Surveillance and Mobility, BDS Development and Phantom Works, as well as Boeing Research & Technology Center, Virtual Warfare center and Boeing Leadership Center. Boeing HorizonX is also located in the Cortex Innovation Community in St. Louis, where it is helping new business ventures unlock the next generation of game-changing ideas, products and markets.

Gelzer said Boeing’s infrastructure needs to continue to evolve in the bi-state area. “When we were only building fighter jets, we’d fly them right out of Lambert Airport; but today the aircraft parts we’re assembling here are shipped by truck to Seattle.” He went on to explain the process of kitting, in which aircraft parts are delivered in kits for streamlined assembly on the production line, which reduces the need for maintaining inventory and expansive warehouse spaces. One example he used was the rudders for the new 777X, which are as wide as the entire span of an F/A 18 fighter jet. In the future, Boeing will be assembling and shipping about eight of those rudders a month. “If a kit doesn’t get here, there’s a tremendous impact on production,” said Gelzer.

Gelzer discussed the importance of an effective supply chain and the St. Louis Regional Freightway’s role in bringing the private and public sectors together to address major infrastructure projects and first and last mile connections. “The Freightway creates a forum to keep us focused.”

“Sometimes we lose sight of the vital efforts underway each day just to keep traffic and product moving. It’s good for us to hear from company representatives to make it more real,” said Jeff Keirn, IDOT Region 5 Engineer.

“St. Louis is now being recognized as a freight hub, and we need to know what we can do to support it,” said Tom Blair, St. Louis District Engineer for MoDOT. “Working together, we’ve been able to come up with a list of projects that improve access and provide reliability.”

Both Blair and Keirn said the challenge is not identifying the infrastructure priorities or even engineering solutions to address them. They agreed that it is a funding issue.

“Transportation is critical to freight, and freight movement is critical to our economy,” Blair said. “We’re going to have to find a way to fund or finance it.”

Blair also said creative solutions like driverless vehicles could create additional capacity on the nation’s interstates by accommodating more vehicles on the roadways to operate closer together, while moving at faster speeds than is currently possible. But, he said, it will be a long time before this technology actually leads to the ability to increase capacity on the nation’s existing infrastructure.

“Infrastructure needs must be addressed to ensure that the vital manufacturing sector of the economy continues to thrive,” according to Lamie. “Identifying infrastructure funding resources is critical in order to establish and advance the St. Louis region as a premier freight hub, not only here in the United States, but around the world.”

The Presenting Sponsor of the the St . Louis Regional Freightway Industry Forum was America’s Central Port.