The booming start-up community in the St. Louis area will contribute to long-term economic growth for the bi-state region. That’s the prediction of Kevin Kliesen, an economist at the Federal Reserve Bank of St. Louis.

“The vibrant start-up environment here bodes well for the St. Louis economy over the longer term,” said Kliesen, who noted that the sector has recently grown faster than start-up hubs in Austin and Silicon Valley, and features start-up incubators like T-REX and Cortex, which have the potential to support stronger future economic growth.

Kliesen was the featured speaker at the St. Louis Regional Freightway Industry Forum in St. Louis on May 31.

He offered an economic outlook at the local and national levels for the manufacturing and transportation sectors. The economist said the nation is continuing to experience the third longest economic expansion in history, then drew on in-depth employment and economic output data to illustrate how the St. Louis Metropolitan Statistical Area (MSA) is keeping pace.

Despite a weak first quarter, Kliesen said, at the national level, both U.S. and global growth appear to be strengthening; business surveys indicate an increasing number of U.S. firms are planning to boost capital spending; construction activity continues to rise, and while world trade has slowed, U.S. exports are solid. He indicated that the St. Louis region’s economy is also strengthening, but at a slower and somewhat uneven pace.

To provide a closer look at the impact of manufacturing and transportation as part of the overall economy, Kliesen looked at employment within the two sectors and output of both sectors as a percentage of national gross domestic product (GDP). While total employment within the manufacturing sector has declined from almost 40 percent back in the early 1940s to about 10 percent today, productivity enhancements have resulted in output from manufacturing remaining constant at about 10 percent of GDP over the past 70 years. 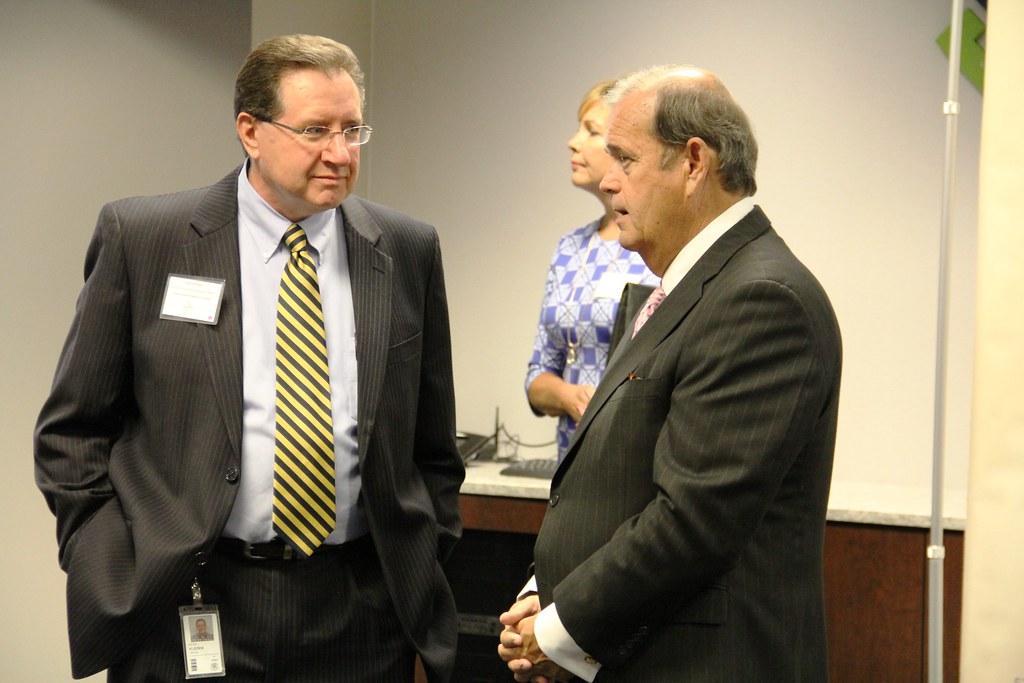 When looking at the St. Louis MSA as part of the global economy, Kliesen said the region is somewhat insulated from U.S. and global developments, although many St. Louis companies do compete in global markets for goods and labor. Big events, like recessions, certainly affect local economies, but Kliesen said the most recent recession hit the U.S. harder than it hit the St. Louis region. As the region emerges from that recession, both employment growth and overall economic growth are on the uptick, but the growth has slowed relative to national growth. A sizable decline in construction industry employment appears to be a contributing factor. The St. Louis region’s growth rate since 2009 hovers at around 1 percent, relative to the national rate of 1.9 percent.

Kliesen shared that the most recent figures available indicate the St. Louis MSA, which includes 14 counties in Missouri and Illinois, has a labor force of 1.5 million and a population of 2.8 million.  St. Louis’ largest industries in terms of total employment include Trade, Transportation & Utilities (18.7 percent); Education & Health (18.1 percent) and Professional Business Services (15.5 percent). Manufacturing comprised 8.4 percent of employment.  Median household income in 2015 was about $56,500, higher than the U.S. median of $55,800. Another big plus for the St. Louis region is the cost of living, which is about 10.5 percent less than the national average.

Kliesen’s presentation was preceded by brief opening remarks from St. Louis Regional Freightway Executive Director Mary Lamie. She provided a brief recap of the Freightway’s key accomplishments in its first year, and noted how the Freightway plans to leverage the information shared by Kliesen.

“We want to draw on Kevin’s information to create a report card we can use as we continue to evaluate our progress,” Lamie said. “Metrics are important to see if we are meeting our goals.”

Promoting the region as a distribution hub is one of the Freightway’s main goals, and Kliesen anticipates additional growth in that area for the St. Louis region. He said increased efforts by Walmart and other traditional retailers to compete with industry giants, like Amazon, are fueling continued development of new distribution centers.

Kliesen joined the Federal Reserve Bank in 1988. In his position as a business economist, he analyzes current U.S. macroeconomic and financial market developments and trends for the bank president and staff economists prior to each Federal Open Market Committee meeting. He also reports on and analyzes economic conditions in the seven states of the Eighth Federal Reserve District and manages the District’s economic outreach activities.

The St. Louis Regional Freightway is a freight district and comprehensive authority for freight operations and opportunities within eight counties in Illinois and Missouri that comprise the St. Louis metropolitan area. The St. Louis Regional Freightway connects public sector and private industry stakeholders to establish the bi-state region as a premier multimodal freight hub and distribution center in the nation through marketing, public advocacy, and freight and infrastructure development. The Freightway is one of five enterprises operated by Bi-State Development.

‘The market has been on fire’: Competition for St. Louis industrial property heats up