The 133-year-old Merchants Bridge celebrated its official grand reopening September 15, following the completion of a landmark $222 million project to replace the vital artery that links Missouri and Illinois near downtown St. Louis. Dating back to the 1890s, the Merchants Bridge serves six Class I railroads and Amtrak as a bridge crossing across the Mississippi River at St. Louis, and replacement of the structure has been the bi-state St. Louis region’s top freight infrastructure priority since 2016.

The event marked the culmination of almost a decade of planning and advocacy and four years of reconstruction to modernize this critical infrastructure over the Mississippi River, which is one of the nation’s primary east-west rail corridors serving one of America’s largest rail hubs by car interchange volume and gross tonnage. This project will double the capacity on the bridge, so it can facilitate two freight trains at the same time and move freight faster, more cost effectively and more reliably, providing a viable alternative to larger congested rail hubs like Chicago.

Elected officials and transportation leaders from Illinois and Missouri gathered with representatives from Terminal Railroad Association of St. Louis (TRRA), Bi-State Development/St. Louis Regional Freightway, Bank of America St. Louis and Walsh Construction for the celebration, which was attended by approximately 150 invited guests. U.S. Senator Dick Durbin (D-IL) and U.S. Senator Roy Blunt (R-MO) and Federal Railroad Administration (FRA) Administrator Amit Bose were unable to attend but sent their congratulations in the form of a video message shared during the official program.

View a slideshow of photos from the event below. 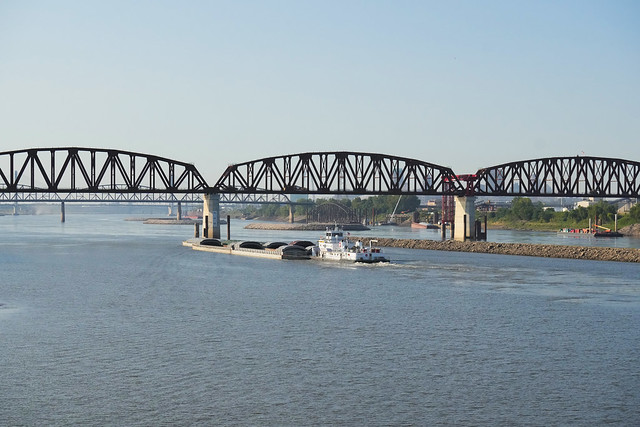 “By renovating the Merchants Bridge, the Terminal Railroad Association has brought it into the 21st century so it can remain a significant part of our freight network,” said U.S. Senator Dick Durbin (D-IL). “The newly reconstructed bridge will move freight faster, reduce delays for motorist and emergency vehicles, and provide reliability for Amtrak passengers. I’ll keep working to bring federal dollars back home to Illinois to support more infrastructure projects.”

“The improvements made to the Merchants Bridge will further strengthen the St. Louis region’s critical role in moving goods around the country,” said U.S. Senator Roy Blunt (R-MO). “Missouri’s location is one of our greatest economic advantages. The Mississippi River Valley is the biggest piece of contiguous farmland in the world and our state is where the nation’s major waterways, highways, and railways come together. I was proud to advocate for the investment necessary to improve this historic bridge and double its freight capacity. I congratulate all of the local leaders and stakeholders who were instrumental in getting this project done and look forward to seeing its positive impact on the region for decades to come.”

“Merchant’s Bridge is a vital link for freight and passenger rail in St. Louis and Illinois and beyond, and this reopening is a shining example of how the private sector, States, and the federal government can work together to deliver impactful projects,” said FRA Administrator Amit Bose. “FRA will support many more projects like the Merchant’s Bridge, and thanks to the Bipartisan Infrastructure Law, we’re going to keep investing in faster, safer, and more accessible rail infrastructure.”

Freight infrastructure needs and supply chain challenges have been top of mind in the wake of the COVID-19 pandemic, but TRRA’s work to deliver this project began long before the pandemic disrupted global supply chains in ways never before seen.

“In our 133-year history, TRRA had never previously built a bridge, but we were looking to the future and the growth in freight volumes expected in the next 30 years and knew that replacing the Merchants Bridge and adding the needed capacity would be essential for us to capture some of that increased volume and solidify the region’s positioning as global freight hub,” said Asim Raza, Chief Legal Officer, Director of Corporate Affairs for Terminal Railroad Association of St. Louis, which owns the bridge. “Our collaboration with the St. Louis Regional Freightway to position this project as the region’s #1 infrastructure project priority helped garner the national attention needed to secure federal funding, and today’s celebration is a signature moment to highlight the success of the bi-state, bi-partisan, public-private partnership that made this project possible.”

The Merchants Bridge required reconstruction due to speed, clearance and load restrictions. Not replacing the Merchants Bridge would have resulted in rail traffic being rerouted out of the bi-state St. Louis region, potentially limiting shipping options for area rail-reliant businesses, increasing costs and lost jobs, and adding stress to an already over-burdened U.S. supply chain network.

“Illinois is the transportation hub of North America, with the Metro East at the center of a robust multimodal network that’s crucial to the country’s mobility, supply chain and freight activity,” said Illinois Transportation Secretary Omer Osman. “Under Gov. Pritzker, we have been reinvesting in this critical asset in Illinois, creating and retaining jobs while keeping the state and the region competitive in the global marketplace. The new Merchants Bridge not only fixes an existing problem, but sets the stage for continued economic opportunity in the Metro East for generations to come.”

“Rebuilding this bridge was a must for Missouri and the nation. With Missouri’s central location and St Louis’ status as one of the nation’s largest rail terminals by interchange and volume, Americans depend upon this connection,” said Jerica Holtsclaw, Director of Multimodal Operations for the Missouri Department of Transportation. “This crucial crossing is vital to Missouri farmers and businesses providing access to markets and connecting them to the global economy.”

The added capacity of the new bridge will help reduce the frequency of mile-long blockages along the St. Louis Riverfront and address one of the chokepoints in the nation’s supply chain network, positioning the St. Louis region to accommodate growing freight demands.

“Replacement of the 132-year-old Merchants Bridge was essential to strengthen our region as a world-class freight hub benefitting all modes of transportation, and to improve the nation’s freight network and support future competitiveness and growth. We salute TRRA and the various partners who helped to deliver the region’s highest priority freight infrastructure project and believe this project demonstrates just how much we can accomplish as a region when we work together,” said Mary Lamie, Executive Vice President – Multi Modal Enterprises at Bi-State Development. Bi-State Development launched the St. Louis Regional Freightway in 2014 with a key goal of advancing infrastructure projects that support the movement of freight through the bi-state St. Louis region.

The Merchants Bridge also serves Amtrak and is a main component of the Chicago to St. Louis high-speed rail corridor. The ability to utilize both the eastbound and westbound tracks at the same time upon completion will be an advantage during delays on the route, helping to increase average Amtrak speeds through the downtown St. Louis portion of the trip. Prior to the reconstruction, only one train could cross the bridge at a time due to weight restrictions.

“Our railways serve as a key connector between St. Louis and other regions for travel and commerce,” said St. Louis Mayor Tishaura O. Jones. “I am glad to see this modernized project finally come to completion so we can welcome more visitors into St. Louis.”

“Today, we celebrate the public-private partnership that has delivered this magnificent new bridge. It is a structure built to meet projected future freight and passenger rail demand. It is critical for continued economic growth in our region,” said Tyrone Echols, Mayor of the City of Venice, Illinois.

The overall project included the removal and replacement of the three river-span trusses, seismically retrofitting the existing river piers, and improving the east approach. As a design-bid-build project, led by General Contractor Walsh Construction, reconstruction of the bridge used innovative project delivery methods that have improved safety and speeded completion while limiting bridge and river traffic outages. Through careful planning and coordination, the project team was able to limit the number of days of rail outages to just 30 days over the four years of the project. TranSystems and Burns & McDonnell served as the lead project engineers, while the steel was fabricated by Veritas Steel in Eau Claire, Wisconsin.

“Walsh Construction is proud to work with TRRA and our project partners to unveil the latest renewal of American infrastructure – Merchants Bridge; a revived, high-quality and sustainable connection that is ready to accept freight and commuter rail traffic simultaneously,” said Matt Walsh, co-chairman at The Walsh Group. “The men and women of this project have delivered an engineering marvel; from retrofitting the existing piers to installing three nine-million pound trusses, all while adhering to the highest standards of safety and quality.”

In 2020, the Federal Railroad Administration (FRA) awarded TRRA a $21.45 million Consolidated Rail Infrastructure and Safety Improvements (CRISI) grant toward replacement of the Merchants Bridge. TRRA is providing 90% of the construction costs, making this project a model for public-private partnerships. The construction financing was secured through Bank of America.

“Throughout our 175-year history in St. Louis, Bank of America has been honored to play a role in so many initiatives critical to the success of St. Louis. The new Merchants Bridge is another example which showcases the success that results from collaboration among so many entities,” said Marilyn Bush, President, Bank of America St. Louis. “We’re excited to see the positive impact this will have on St. Louis and the supply chain needs across the country.”

TRRA President Brent Wood highlighted the importance of the Merchants Bridge to the regional and national supply chains and shared insight on the regional economic impact of the project to replace it.

“This project supported 1,100 construction-related prevailing wage jobs as the work progressed over the past four years to deliver a new structure with increased national rail and multi-modal capacity, resilience and redundancy, and the economic benefits of this new bridge will be both immediate and long lasting,” said Wood. “Just as important, we estimate TRRA’s economic impact in the region will almost double, as we generate more than $456 million in local economic activity over a 20-year period.”

TRRA further anticipates the region will see more than $370 million in operational savings from reductions in delays, rerouting and operations and maintenance. Even as TRRA celebrates the conclusion of its first major infrastructure project, the organization is already working on an additional expansion of its operations in the bi-state St. Louis region. The planned $52 million St. Louis Multi-Modal Freight Yard Expansion at Madison Yard (IL) will expand railcar capacity by approximately 1,500 cars, further strengthening the region’s rail freight and supply chain networks.

Department of Labor awards $5.8 million grant to Madison County and the region to be a part of the Apprenticeship Building America program