Missouri Governor Michael Parson visited the Mississippi River town of Herculaneum on August 12 to find out more about statewide efforts to deliver a new option to transport freight along the inland waterways and what role an innovative waterway vessel could play in moving larger volumes of goods and commodities along both the Mississippi River and Missouri River and their tributaries. He was joined by a group of Missouri lawmakers, Jefferson County elected officials, representatives from the port authorities of Jefferson County, Kansas City and Jefferson City, and others. The governor and lawmakers learned that Container-On-Vessel (COV) service is expected to reduce freight transportation costs and increase efficiency and reliability for shippers. After hearing a presentation about COV plans in Missouri, Parson recognized the potential statewide initiative as a visionary plan that could provide tremendous opportunity for Missouri.

“If you really look at Missouri and look at the ports we have running down both sides of the state – something no other state has – and you look at our highway system going north, south, east and west, and you look at our rail system spanning across the country to the east and west coasts, to Canada and Mexico, we have the ideal, prime location in Missouri to capture these kinds of investments in our state,” Parson said. “We’re going to put everything on the table that we can to find a solution.” 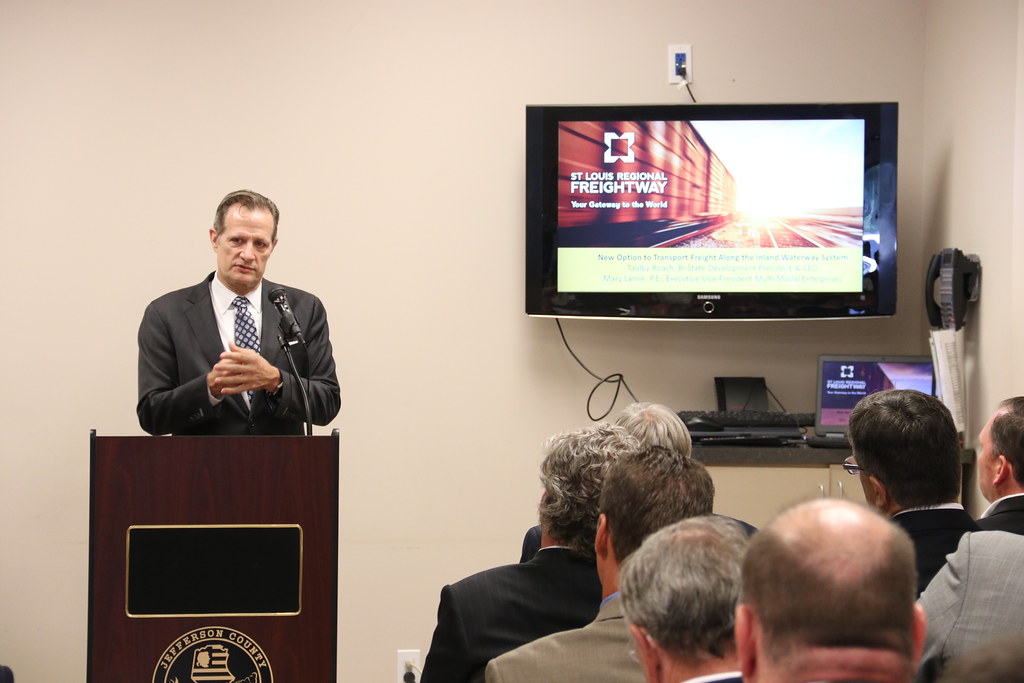 “One of the biggest portions of that is, how do we create a cogency for the private sector to do better economic business within our state and the bi-state region,” said Roach. “That’s our job, that’s why I’m here today, and that’s why we’re looking to advance this project forward and gain Governor Parson’s and the Missouri Legislature endorsement on this idea.”

Mary Lamie, Executive Vice President of Multi Modal Enterprises at Bi-State Development, talked about the expectation for freight volume to increase by 40% in the next three decades and the importance of the Midwest capturing a part of those increased freight volumes. She also said changes in global trade patterns are impacting how containers are moving in and out of the United States, creating an opportunity for vessels to become a huge gamechanger as they continue to grow larger and larger. Among the types of commodities that can move in containers on these larger vessels – for the State of Missouri and for this region – are seasonal furniture, appliances, construction material like ceramic tiles, various other imports and exports and containerized soybeans. Refrigerated products like beef and pork may also be an option.

“Our region has earned the status of having world-class freight network based on national rankings,” said Lamie, who leads the St. Louis Regional Freightway for Bi-State Development. “We’re the third largest inland port, third largest rail hub in the nation and one of the most competitive and efficient inland port systems in the nation. In 2017, we branded our region as the Ag Coast of America and that’s based on the fact that nowhere else on the Mississippi River has the capacity for barge handling of fertilizer and agriculture products that we do, and that’s based on those freight assets.”

Seeking to connect more freight via the inland waterways to those freight assets, Lamie has been engaged on the COV effort, and recognized the need to partner with sister cities like Kansas City and Jefferson City within the State of Missouri, as well as with ports in the State of Louisiana and with IDOT, MoDOT and the U.S. Department of Transportation to help advance the idea.

“We know that as a nation we’re lagging behind in infrastructure and what we’re trying to do today is better maximize the existing modes of transportation,” said Lamie. “The inland waterway system obviously is under-utilized, and this is a tremendous opportunity for not only our region, but the State of Missouri to take advantage of these growth opportunities that are taking place with freight.”

Sandy Sanders, Executive Director of the Plaquemines Port Harbor & Terminal District, where the Gateway Terminal for the new COV service would be developed, provided additional insight on those opportunities.

“In 10 years, there’s going to be a 10 billion ton increase in maritime cargo,” Sanders said. “If that cargo is going to the Gulf Coast, you need a true gateway port.”

He added that the Gateway terminal, with the ability to accommodate a 20,000 TEU ship and connect with all the modes of transportation in the Midwest, is unlike any other in the nation, and will give beneficial cargo owners optimal options to move their cargo.

“We’re implementing a whole new system that starts with a strategic, state-of-the-art Gateway Terminal, linked to strategic state-of-the-art container terminals in the Midwest, connected by innovative and patented vessels that carry critical mass at the lowest landed cost on an all-water route, providing significant savings to shippers without compromising reliability,” said Litrico. 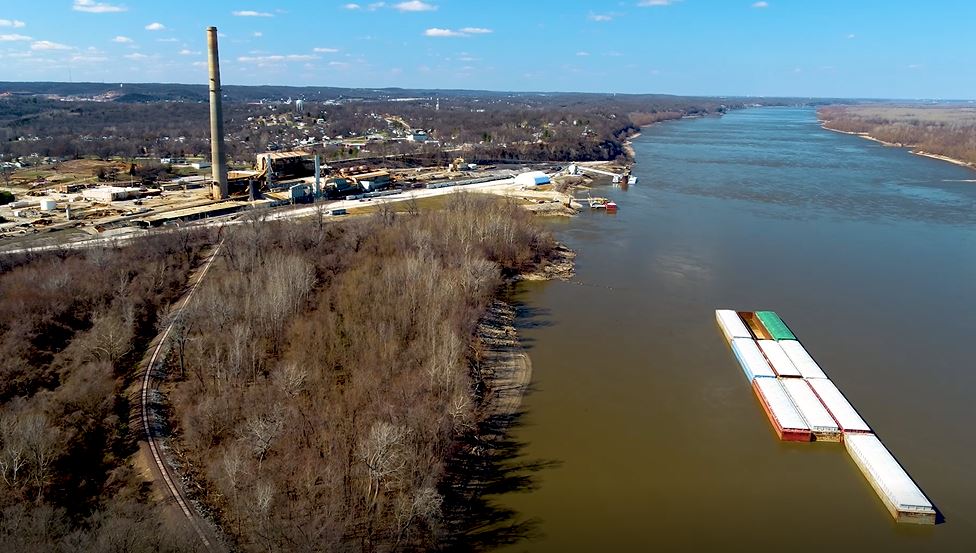 The patented vessels APCT is developing would be capable of carrying large quantities of containerized freight at more rapid upriver speeds on an all-water route, connecting Missouri ports in Jefferson City, Kansas City and the St. Louis region to the lower Mississippi River — and ultimately to Asia, Europe and other foreign ports. The Liner vessel will carry up to 2,500 containers or twenty-foot equivalent units (TEUS) at speeds of 13 miles per hour upriver with virtually no wake, making round trips from Plaquemines Port Harbor & Terminal District in Louisiana to Memphis possible in seven days and to the St. Louis region in 10 days. Hybrid vessels are designed to carry 1700 TEUs. A TEU is a 20 foot long by 8 foot tall shipping container.

Kansas City and Jefferson City are the ports of call on the Missouri River selected by APCT as well as a potential location in Jefferson County at Herculaneum. The Herculaneum site is being considered due to its strategic location on the Mississippi River, just south of St. Louis, the northern most ice-free port on the Mississippi River with easy access to the interstate system and access to the Class I railroads. Mark Denton, Manager of the Riverview Commerce Park at the Port of Herculaneum, said that $2 million has been invested in the port facility since 2013, and a million tons of commodities now move through the 18-acre site annually, but he sees additional growth on the horizon.

“We were very fortunate to meet Sal and the others involved in this initiative and we want to be a part of this and see how it goes,” said Denton, but he pointed to his colleagues at Doe Run as the entity that would be the real catalyst for the future growth, as they own the property that would be repurposed to house the new container terminal. “We’re looking at two potential berth spots for APCT vessels coming in, and warehousing and railroad expansion and things of that nature, as we see things growing in the future.”

Litrico said a common footprint would be used for the development of the terminal in Herculaneum and the other Missouri terminals at the ports in Kansas City and Jefferson City.

Litrico said the due diligence process is starting and is expected to be complete by March 2020, with the anticipated operational date in March 2022. Parson indicated Missouri lawmakers would decide if a statewide initiative would move forward. Jefferson County Executive Dennis Gannon said he and the other partners hoped to get a working group together in Jefferson City to further advance the plans.

In regard to the high-water events the Midwest faced in 2019 and other historical high water events and the disruptions that could impact COV operations, Litrico said there were many lessons learned, and adjustments to terminal and intermodal plans to ensure reliable operations are being considered.

“We’ve reached out to all of our partners to see how they were impacted in 2019 and what we need to do differently from our conceptual design to remain in business and to keep our customers in service,” Litrico said. “Some very insightful information came from that and we’re looking at that to apply it to our business plan.”

Farmers Are Planning For Illinois River Shutdown Next Year