The St. Louis Regional Freightway, Plaquemines Port Harbor & Terminal District located in the State of Louisiana and four ports in the St. Louis region have entered into a Memorandum of Understanding (MOU) to establish and grow an alliance to generate new business by promoting international and inland trade routes at strategic locations along the Mississippi River. The agreement, which represents a five-year commitment, calls for joint marketing initiatives and exchange of data to further those goals.

The agreement embodies the St. Louis region’s strong support for the efforts underway by marine transportation services leader American Patriot Holdings, LLC, and the Port of Plaquemines to develop a hub-and-spoke transportation system for container transport vessel shipments from Plaquemines, at the mouth of the Mississippi River just south of New Orleans, to the St. Louis region. Initial discussions have focused on loading operations at a centralized location in Jefferson County, Missouri, with feeder services by rail, barge and truck throughout the bi-state region and the Mississippi River Basin resulting in low costs and efficient transportation.

“The Freightway is committed to serving the greater St. Louis region by helping to support efforts to attract shippers and carriers, and we believe the proposed container transport vessel route would benefit the entire region and other ports along the Mississippi River Basin,” said Mary Lamie, Executive Director of St. Louis Regional Freightway. “Today’s signing represents bi-state support and recognition by all four public ports in the area of the potential growth that could arise from this MOU, and it stands as another outstanding example of regionalism at its best.” 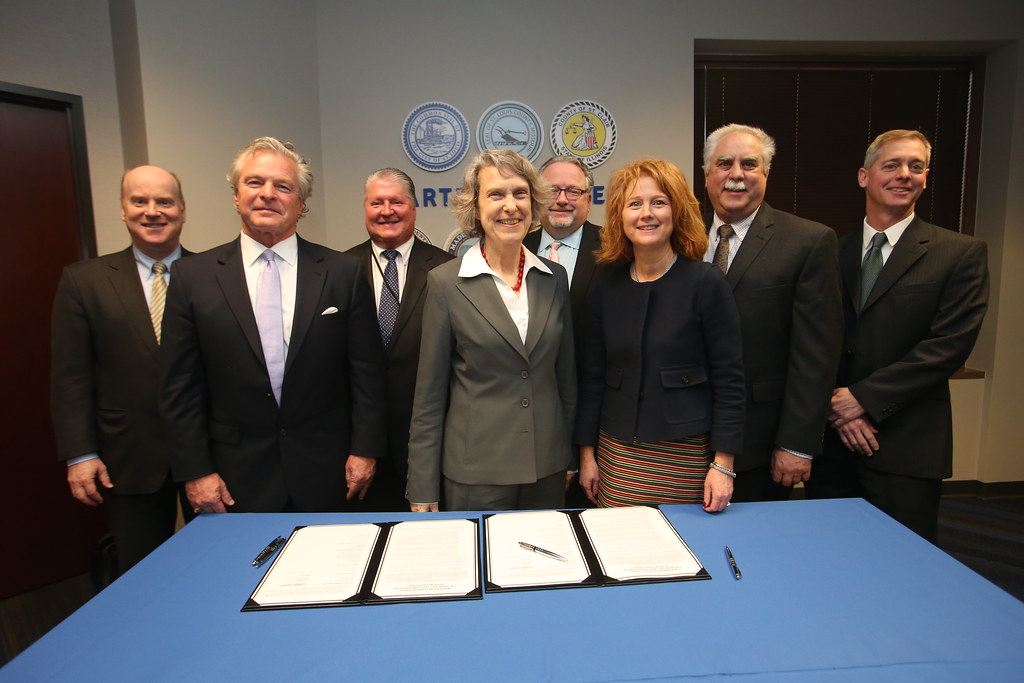 Sanders called the signing of the agreement an important step. “The relationships we are building with ports like Jefferson County and the neighboring ports in and around St. Louis are important first steps in creating a transportation network between Plaquemines Port and upper ports along the Mississippi River. We plan to move thousands of containers from our port to theirs utilizing the American Patriot Holdings’ unique container transport vessels. The hub-and-spoke system provides opportunities for value-added services to be performed on the shipped goods at any of the cargo aggregation points. This is a real job multiplier.”

The MOU follows the signing of an exclusive agreement last year by Plaquemines Port and American Patriot Holdings to provide container service from a future terminal in Plaquemines to destinations as far north as Chicago. The unique American Patriot Holdings’ vessels are patented and will carry up to 2,500 containers at speeds of 13 miles per hour with virtually no wake, making rounds trips possible to Memphis in seven days and to St. Louis in 10 days. The vessels recently completed model testing in Germany, and final engineering and design is underway. Given that progress, American Patriot Holdings and the Port of Plaquemines are exploring where the vessels will stop along the inland waterways, and the St. Louis region is a viable contender.

“This agreement is not a formal commitment to establish operations in Jefferson County, but it’s a key milestone in the process to develop a large-scale port in the St. Louis region that supports a transportation network between the Plaquemines Port and the upper ports of the Mississippi River,” said Breitweiser. “The St. Louis region is the northernmost ice-free and lock-free port system on the Mississippi River that serves the Midwest, making our region an ideal location to receive and distribute high volumes of cargo through the nation and the world.”

The MOU between the five ports and St. Louis Regional Freightway will help facilitate sharing of marketing activities and enable them to exchange data and findings from marketing studies relative to developing port opportunities. It also offers parties opportunities to share information on improvements and modernization efforts and technological capabilities and programs. Much like the MOU signed in 2017 by the Port of New Orleans and the St. Louis Regional Freightway and America’s Central Port, the Port Authority of St. Louis, and the Kaskaskia Regional Port District, this agreement recognizes that growth at the ports at the mouth of Mississippi River, and future growth around freight movement through the various ports in the St. Louis region, are intrinsically and historically connected.

“Given the 40 percent growth projected in freight volume over the next 30 years, we believe collaborations like these will have far-reaching positive impact for the St. Louis region and the entire nation,” Nations said. “We want shippers to have as many options as possible to move some of that freight through our ports along the stretch of the Mississippi that continues to gain recognition as the Ag Coast of America. This latest agreement supports the region’s efforts to provide an additional modal choice to cargo shippers.  With more than 12,000 miles of vessel navigable rivers in the U.S., increasing shipping capacity along the inland rivers will reduce shipping costs and help the nation better compete in the global market.”

Currently, most of the containers heading to the Midwest are moving by rail from California. The widened new lane of the Panama Canal has transportation experts looking at less costly options, which include Gulf of Mexico and East coast ports.

“The Plaquemines to St. Louis route would be a key component of the service American Patriot Holdings intends to implement throughout the Mississippi River Basin,” Sanders said.  “There are a wide variety of opportunities we are exploring, which include utilizing the vessels and port facilities for agricultural products, including refrigerated cargo. Ideally, goods and products could be shipped up river, and agricultural products could be shipped down river. The timing is right for us to market this new option which will move large numbers of containers via the Mississippi River, our nation’s greatest river highway. Utilizing American Patriot’s liner vessel and smaller hybrid vessel, connection by water is feasible through the lock system and some of the smaller tributaries of the Mississippi River.”

About The St. Louis Regional Freightway

The St. Louis Regional Freightway is a Bi-State Development enterprise formed to create a regional freight district and comprehensive authority for freight operations and opportunities within eight counties in Illinois and Missouri which comprise the St. Louis metropolitan area. Public sector and private industry businesses are partnering with the St. Louis Regional Freightway to establish the bi-state region as one of the premier multimodal freight hubs and distribution centers in the United States through marketing, public advocacy, and freight and infrastructure development.  To learn more, visit thefreightway.com.

About The Port of Plaquemines

The Plaquemines Port Harbor and Terminal District was created as an agency of the State of Louisiana in 1954 and has jurisdiction over the southernmost 90 miles of both the east and west banks of the Mississippi River. It ranks 11th by tonnage in the United States. Both public and private facilities are located throughout the district including energy, bulk cargo and planned container operations. It is the only port on the Mississippi River accessible to the 21,000 TEU vessels in service today and at mile 50, is the closest access point to the Gulf of Mexico. In addition, there is 4-lane highway connectivity to the interstate system, rail, pipeline and future air cargo within the port jurisdiction. To learn more, visit www.portofplaquemines.com.

Farmers Are Planning For Illinois River Shutdown Next Year