The St. Louis Regional Freightway and the Port of Savannah are forging a partnership to create a new connection between the St. Louis, Mo. region and the largest single-terminal container facility in the western hemisphere. In response to record movement of 4.3 million TEUs (20-foot equivalent units) in fiscal year 2017, the Port of Savannah is investing $3 billion to increase its containerized cargo capacity from 5 to 8 million TEUs by 2028. The investment will accelerate the efforts of the nation’s third busiest container gateway to better support retailers and manufacturers and distribute more goods to and from the interior of the United States. The growing Port of Savannah has identified the St. Louis region as a key import/export market to which containers can consistently be distributed at a lower cost for shippers.

An important component of the Port of Savannah’s development plan is a new $220 million rail terminal that will be the largest on-terminal rail facility in North America by 2020.  The rail expansion will improve efficiency and double terminal rail lift capacity to approximately 1 million containers per year. The unit train capacity on terminal will build density into the system, and enable rail providers CSX and Norfolk Southern to deliver faster, more frequent rail service to Midwest markets, including St. Louis, where both rail companies already have established intermodal yards. Both are Class 1 railroads and two of the seven largest rail companies in the nation, providing a direct link between the Port of Savannah on the East Coast and the St. Louis region in America’s heartland.

John Trent, Senior Director of Strategic Operations and Safety at the Georgia Ports Authority, which owns and operates the Port of Savannah, talked about the new rail service the Georgia Ports Authority aims to develop between Savannah and the St. Louis region. Trent was the keynote speaker at the St. Louis Regional Freightway Industry Forum on May 23. He said it would be an attractive alternative to shipping by rail from the West Coast to St. Louis. He cited recently completed research that reveals the cost to shippers using the new service would be $300 to $400 less for each container moved, and the total time in transit would be comparable. Just as important, the rail service would be consistent from Savannah, a distinct advantage over more traditional gateways. 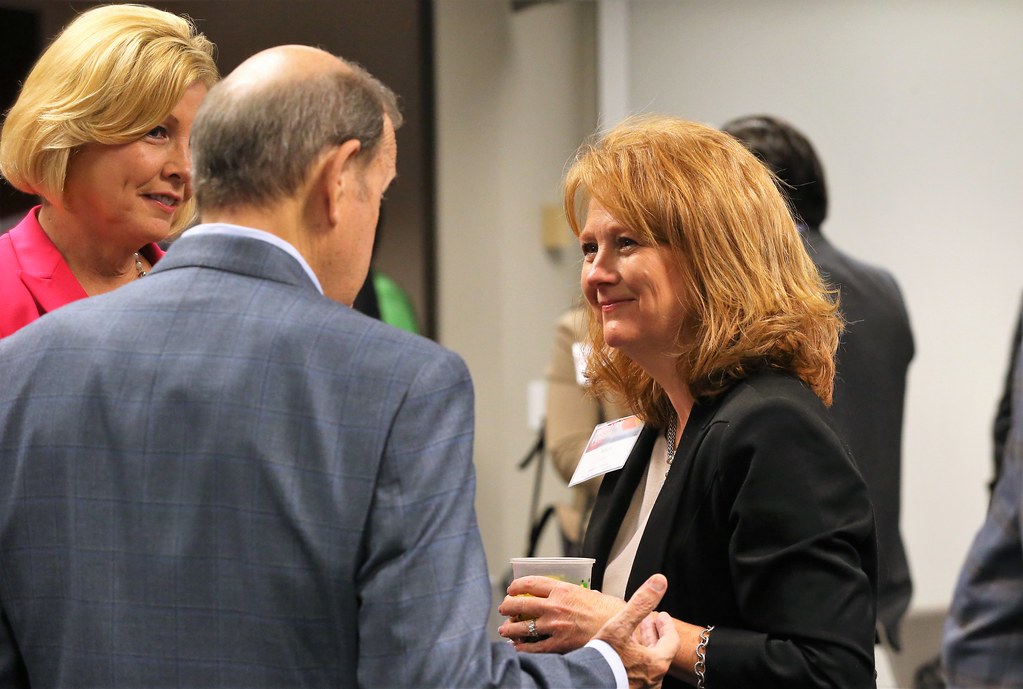 That is welcome news to Mary Lamie, Executive Director of the St. Louis Regional Freightway, which hosted the Industry Forum as the final event of FreightWeekSTL 2019 in St. Louis. Lamie and other freight industry leaders from the St. Louis region have been building the relationship with the Port of Savannah over the past several months.

“I cannot overstate the potential of this new partnership and the opportunities it can create to develop stronger links between our region’s world-class freight capabilities and national and global supply chains,” Lamie said.

During Trent’s visit to St. Louis for the Industry Forum, he visited the CSX intermodal yard in East St. Louis, Ill., the Norfolk Southern intermodal yard in St. Louis, Mo., and other components of the region’s freight network with representatives from the regional freight industry.  Matt Freix, Regional Vice President for DNJ Intermodal Services, also participated in the special tour on May 22.

He highlighted the St. Louis region’s ranking as the third largest rail hub strategically located in the center of the United States, with four intermodal yards all having close proximity to all modes of transportation. Those modes include the nation’s third largest inland port and most efficient inland port system, as well as four interstates connected by the Interstate 270 outer-loop. Freix also called attention to the proposed improvements and enhancements at the Norfolk Southern yard, which has the available capacity to handle more containers and move them quickly to major markets using the region’s robust interstate system. Across the Mississippi River in Illinois, the CSX Yard has direct access to all four interstates as well as Illinois Route 3 and is able to deliver high-level service moving trucks in and out quickly and efficiently. Both locations present shippers with an opportunity to save both time and money when shipping through St. Louis.

“For DNJ Intermodal Services, our customers are taking advantage of the region’s low rail congestion and quick truck turnaround times,” Freix said. “It’s an incredible alternative to Chicago’s rail congestion and ongoing trucking capacity shortage. And it’s also a great alternative to Memphis, where there are issues with getting enough chassis on the trucking side.  When combined with our intermodal connectivity and infrastructure, freight forwarders are rerouting through the St. Louis region to save both time and cost.”

Trent said he was impressed with what he saw of the St. Louis region’s freight assets. He also pointed out another advantage of the St. Louis region – the relative proximity to his port. St. Louis is 350 miles closer to the Port of Savannah than any other major East Coast gateway, another factor making the partnership between the two entities such a good fit.

“From a history standpoint, your Arch is known as the Gateway to the West,” he said. “I look at that really as a gateway to and from the East. We want to be your partner and formalize this and work together as a team to develop this market as a gateway to provide savings for your constituents here.”

This is the second year FreightWeekSTL was held in conjunction with the Inland Marine Expo (IMX), drawing an estimated 1,500 to 2,000 participants who are involved in freight and logistics to St. Louis. Held May 20 through May 23, FreightWeekSTL 2019 was a premier event for industry experts, business leaders and elected officials to learn about new developments and the latest innovations shaping the future of the freight industry, new economic partnerships, and the St. Louis region’s growth in the global freight and logistics marketplace. It also gave participants firsthand exposure to the St. Louis region’s unrivaled location as the epicenter of American logistics.