With dramatic growth projected in the global container market over the next decade, public and private sector leaders are working together to move even larger volumes of goods and commodities along the Mississippi River and its tributaries. The Containers on the Inland Waterways panel discussion on May 22 at FreightWeekSTL in St. Louis, Missouri highlighted the global demand for containers from a Midwest perspective. The discussion also included how the Midwest agriculture industry is positioning itself to meet the competitive logistics needs of farmers and the role of local ports in supporting the efforts through leadership and infrastructure investment. It also provided insight on the different business models currently being used or being proposed to grow container volume on this vital river corridor.

“The nation’s inland port system clearly plays a critical role in the global supply chain,” said Mary Lamie, Executive Director of the St. Louis Regional Freightway, moderator of the panel discussion. “With the new wave of larger ocean carrier container vessels, the projected global growth in the container market by 2030, and the emphasis to reduce truck traffic on the nation’s highway system, ports and regions are working together to provide container-on-barge (COB) and a proposed container-on-vessel (COV) service. These efforts include regions throughout the Midwest working together, ports investing in new equipment, repositioning of empty containers, channel deepening and other infrastructure investment.”

Ken Eriksen, Senior Vice President at IEG Vantage, talked about some of the changes impacting the container market, highlighting the increasing vessel size in recent years to almost 24,000 Twenty Foot Equivalents (TEUs) as of 2017, the widening of the Panama Canal, consolidation among the container lines in the industry, and growth in the number of inbound containers arriving the United States. 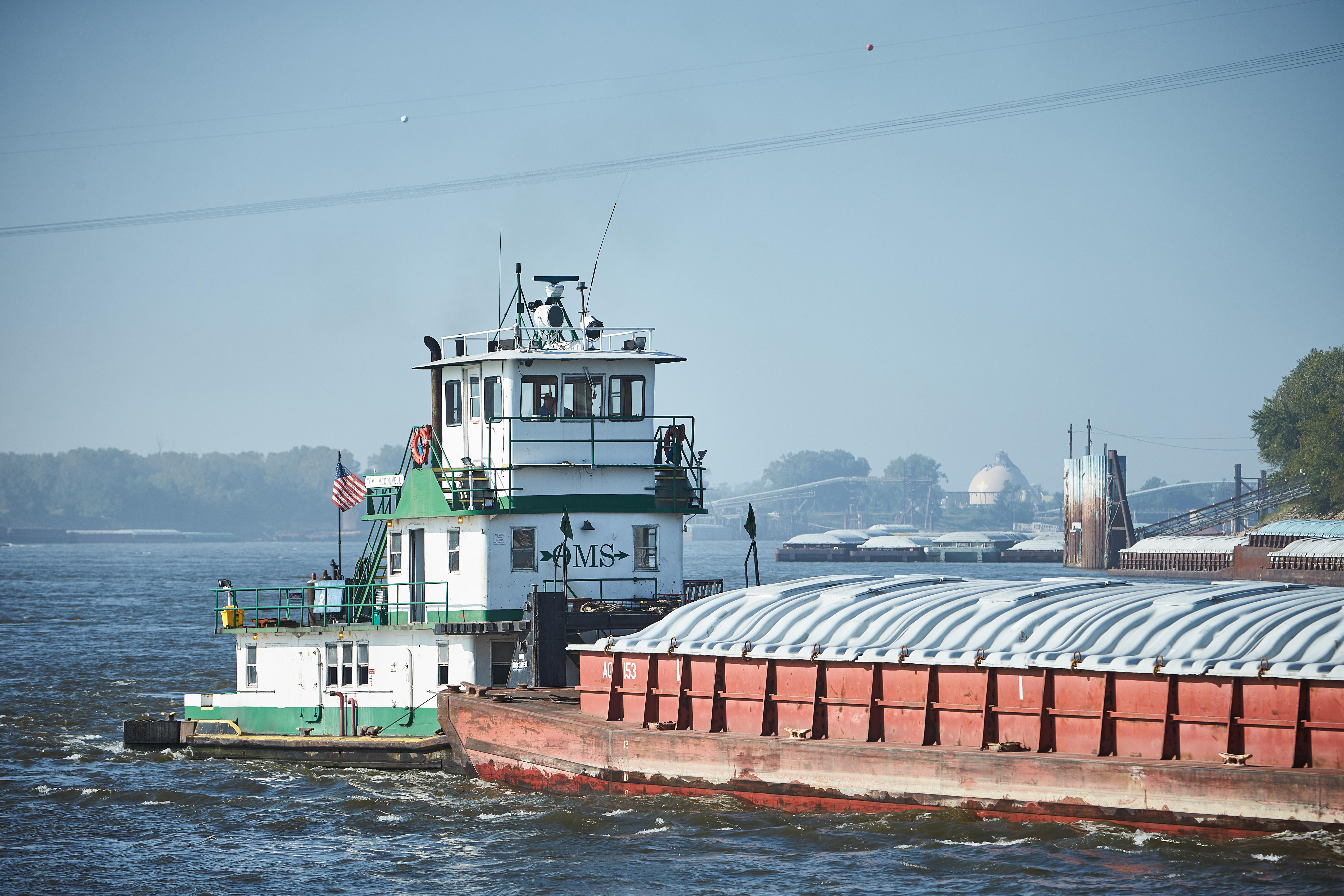 Eriksen also called attention to that fact that, in 2017, for the first time, the number of containers arriving at East Coast ports surpassed the number arriving at West Coast ports, while the Center Gulf ports have experienced slow but steady increases in container volume. That is a trend he believes will continue and one that should bode well for the efforts to bring COB or COV service to the Midwest.

Scott Sigman, Transport and Export Infrastructure Lead for the Illinois Soybean Association, said the empty containers are not just in the coastal ports. “Two thirds of the containers coming into the country from either the East or West coasts touch Chicago and the Chicago region,” Sigman said.

While Sigman acknowledged that not all are stopping there, many do, providing the advantage of empty available containers. That availability came to the attention of some entrepreneurial farmers back around 2004, and they started using them to ship soybeans, mostly by rail.  With the State of Illinois bordered by the Ohio River on the south, Mississippi River on the West and the Illinois River running right through it, Sigman said he sees potential that some of the grain handling terminals in Illinois could be a fit for COB service, particularly as farmers add new customers in Taiwan, Indonesia and other countries seeking to purchase smaller volumes of soybeans better suited for shipping by container than traditional bulk barge. He said it might require a subsidy of some sort to get the service started before it would become self-sustaining.

Despite the fact that container on barge service has been launched successfully in other markets in the U.S. and Europe, Dennis Wilmsmeyer, America’s Central Port Executive Director, said that, nationwide, there is still very little familiarity with the concept. He called on others to help raise awareness about the service and its advantages and said that funding for such service is available through the Maritime Administration. Wilmsmeyer also pointed to the collaboration amongst all the local ports in the St. Louis region who are all working together and with other regions and partners to bring innovative new services like container on barge and container-on-vessel to the Midwest. He cited the various factors that make the St. Louis region a prime spot for such service. Those include being the northern-most and ice-free location on the river before entering into any locks and dams; America’s Central Port’s two harbors, with one north of Locks 27 and one south; six Class one railroads and the convergence of four major interstate highways. 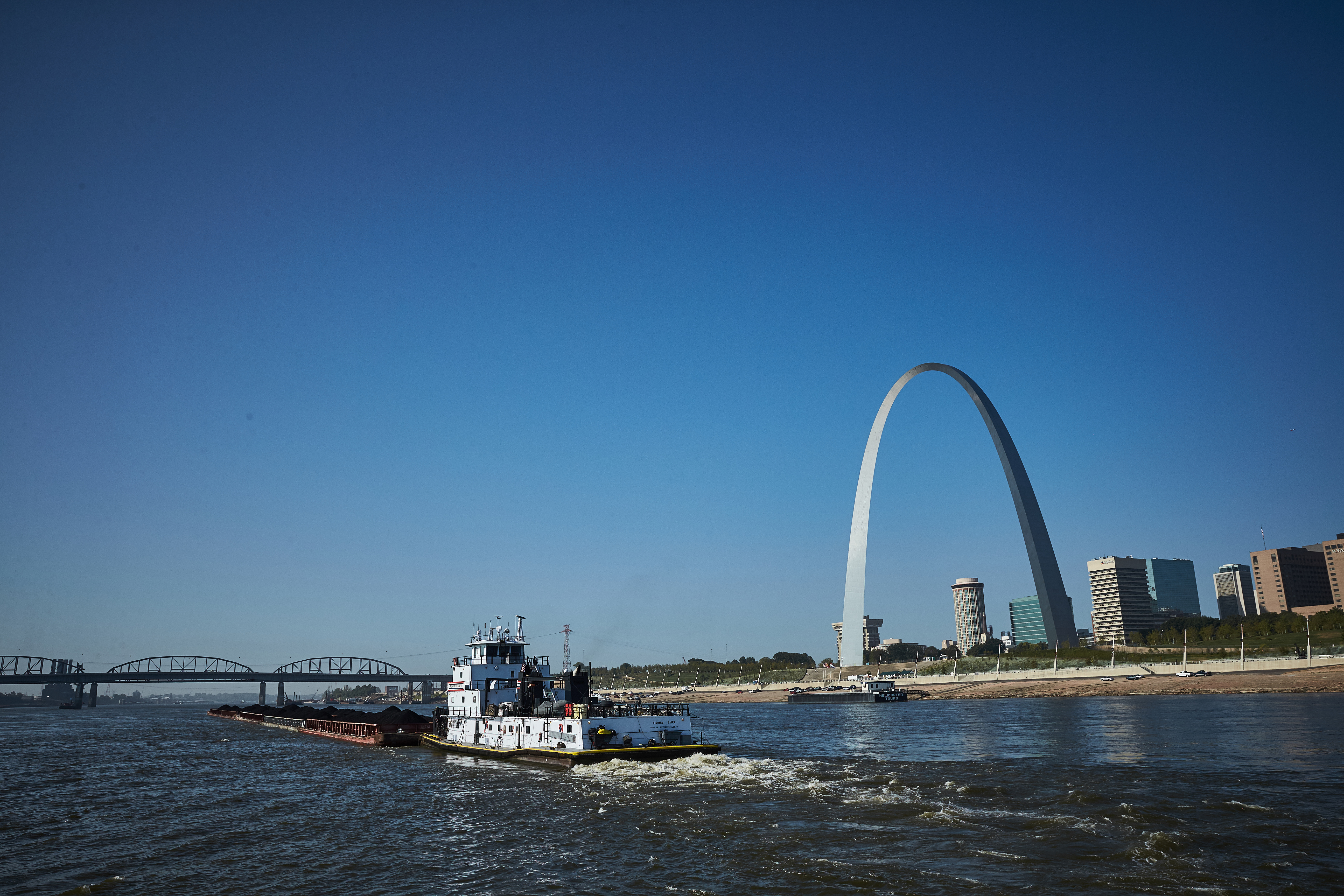 “The St. Louis region is well-positioned,” Wilmsmeyer said. “It’s like a hub to the rest of the country.”

Wilmsmeyer said while the St. Louis region is in a bit of a container deficit market, that is changing rapidly as large local companies and warehouse distribution facilities switch from 53-foot trailers to containers, bringing more of them into the region.

Among the innovative new services Wilmsmeyer envisions utilizing those empty containers is the proposed Container-on-Vessel (COV) service that Sal Litrico, Chief Executive Officer, American Patriot Container Transport, LLC (APCT) talked about. The patented vessels Litrico’s company is developing would be capable of carrying mass quantities of containerized freight at more rapid upriver speeds on an all-water route, connecting ports in the St. Louis region and elsewhere in the Midwest to the lower Mississippi River — and ultimately to Asia, Europe and other foreign ports. The Liner vessel will carry up to 2,500 containers at speeds of 13 miles per hour with virtually no wake, making round trips from Plaquemines Port Harbor & Terminal District in Louisiana to Memphis possible in seven days and to the St. Louis region in 10 days. Hybrid vessels would be a little smaller and more nimble than the Liner ships. They would be able to make direct trips between the Plaquemines and Midwest ports along the Mississippi while also connecting with other ports on the tributary rivers, where they could pick up additional freight. Litrico said he anticipated existing container on barge services would also support the hub-and-spoke system as a feeder vessel. Two independent, third-party studies have shown that shippers using the new service could see cost savings ranging from 40 to 44 percent.

To make the container-on-vessel service a reality, APCT is working with several strategic partners along the Mississippi, including St. Louis, Memphis, Cairo, Kansas City, Jefferson City, Joliet and others, as well as the Plaquemines Port Harbor and Terminal District, where a new Gateway Terminal is planned. Gateway terminals in the Midwest would be developed in Memphis and in Jefferson County, Missouri, just south of St. Louis.

“These ports are not in competition with each other,” Litrico said. “One common goal is providing transportation alternatives for our customers. Success is building a network of national and regional beneficial cargo owners (BCOs) who are seeking added value to the supply chain.”

Litrico said some of the major next steps in launching the service include obtaining approval in principle from the American Bureau of Shipping, finalizing Memorandums of Understanding with high-impact BCOs and securing the necessary financing to move forward. He said he expects marine operations to commence by September 2021.

Richard Teubner, Vice President SEACOR AMH an operating company of SCF, shared an overview of the successful container on barge service that it launched in 2016 to reposition empty containers from Memphis and get them to the container on barge facility in Port Allen, Louisiana. Chemical companies in the area fill the containers with plastic resins, and they are again loaded onto barges and taken to New Orleans where they are put on ships for export.

“We follow the cargo,” said Teubner. “We provided a system that makes the truck and dray service a last mile service, and we provide this loop that delivers an efficient, cost-effective and timely service for the export vessels going out of New Orleans,” said Teubner.

FreightWeekSTL was held in St. Louis May 20-23 for the second year in a row in conjunction with the Inland Marine Expo (IMX). Freight industry and business leaders, elected officials and transportation experts from around country shared ideas and collaborated on the forward movement of America’s growing freight industry while getting firsthand exposure to the St. Louis region’s unrivaled location as the epicenter of American logistics.

The St. Louis Regional Freightway is a Bi-State Development enterprise formed to create a regional freight district and comprehensive authority for freight operations and opportunities within eight counties in Illinois and Missouri which comprise the St. Louis metropolitan area. Public sector and private industry businesses are partnering with the St. Louis Regional Freightway to establish the bi-state region as one of the premier multimodal freight hubs and distribution centers in the United States through marketing, public advocacy, and freight and infrastructure development. For more information, visit thefreightway.com.

We would like to recognize the following St. Louis region freight industry leaders for their successful completion of first Inland Port Executives Class: